Purchase of Awnings in New Delhi

The heat in New Delhi can be so oppressive that it literally turns the house into a ‘bhatti’ (oven) and this is what I experienced now after coming back from Bangalore in April 2012. Our house is located on the 2nd floor and with no further construction on top the house heats up to an unbearable extent. Added to this the living area, kitchen and master bedroom face east and since early morning the strong sun would literally beat us back into other rooms of the house and keep the air-conditioning up.

Not only does the heat sap your energy but it tends to restrict the physical presence in a nice air conditioned room. On a personal note I do not find that to be very healthy but it’s more out of lack of options, I guess.

One of the various alternatives to beat the heat was to probably try out the concept of putting awnings  on the east side of the house and that could help reduce the heat and also provide some shade from the hot summer sun rays. It would allow us to at least work in the kitchen.

As a habit I have developed over the past few years I like to do a bit of net research  on the subject matter and this helps me understand the basics of the topic at hand and definitely helps me talk more sense to the potential vendors.

Another trip to Kotla market in South Delhi and we started looking at all the shops that dealt with awnings which weren’t too many to start with and we had to just visit four of the shops which adjacent to each other.

The awnings are applied in shops / restaurants / homes and the vendor should be able to suggest the kind of awnings that would best suit your requirement. We focused on the terrace awnings with manual retraction mechanism.

The mechanism of the awnings is quite simple with the framework being made of aluminium with a manual lever which basically rolls the awnings fabric inside or turn the lever the other way and the fabric rolls outside forming a canopy. The covering is either made of PVC or of fabric. The PVC is much cheaper and can cost about 30% lesser as compared to the fabric but has a tendency to lose its color and gets brittle in about 3 years time. The fabric lasts longer and the some of the reputed ones come with a guarantee of 10 years. 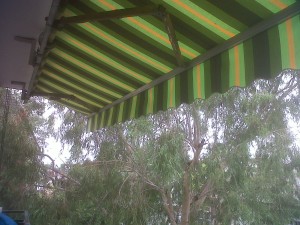 The shops quoted a price of Rs 220 per sq ft which included powder coated aluminium frame, imported fabric, transport and installation. After certain negotiations the price was reduced to Rs 200 per sq ft and the shop owner would not negotiate further. The area that we wanted to cover was about 40 ft in length and the awnings come in a minimum width of 6 ft which translated into about 240 sq ft. We felt we needed a better deal and hence continued with our quest. Panipat Handloom House in Kotla is another shop that deals in awnings and we met the owner Sunny and discussed our requirements with him. To get a better pricing I gave him the option of using basic aluminium instead of powder coated (the finish is for aesthetics) and after further reengineering and negotiations we managed to close the deal at about 20% lower than what the other dealers were offering post all discounts and schemes.

I felt that all my efforts had paid off well and recommend that anyone having the need to buy awnings in Delhi should try out this company. Unfortunately I lost his contact number but I am sure that you could Google them or take help from Just Dial.