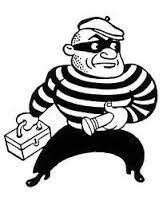 I finally joined the distinguished (?) club of people who steal things from their hotel rooms. I don’t know if there is a terminology for this kind of crime or whether it is considered as a crime at all but then I just committed it.

People steal from hotels for some reason or the other……for some it’s a chance for them to recover part of the tariff charged, for some they are considered freebies, for some it’s just a kick……I did it for none of these and yet I joined their club…..and what did I steal….a salt and pepper shaker. It was on an impulse really and didn’t think much about it neither before nor after throwing the shakers in my overnight bag. They were made of pretty ordinary plastic (not silverware) which may have cost no more than a loaf of bread. I had truly no reason at to do what I did and for what…..a f***ing salt and pepper shaker!!!!

The cart raiders, I believe they are called and I term them as ‘bhangi’….a word borrowed from the ancient system in India to denote the lowest caste but also interpreted loosely as ‘cheap person’. A title which I had given to my wife on one of our vacations a few years back where  we stayed at a lovely property of Taj in Ooty. She put the small bottles of shampoo and conditioners in her bag and called promptly called the housekeeping services and told them there was no shampoo in the loo.

Once replenished, she was like the tiger who had tasted blood and over the next few days her hand bag was stuffed with bottles of shampoos, conditioners, bath foam, tea bags, sugar sachets, ketchup sachets and drink stirrers. And each time that she managed to pilfer something from the cart she would burst out in peals of delighted laughter and my kids would join in the excitement of getting something free. Thankfully the raids were restricted to the consumables and did not extend to towels, cutlery or any other things in the room.

Guess what…..some of the tea bags and the sugar sachets are still to be found stuffed in a tin box stored in some obscure corner of the kitchen in my house, even after 5 years after that holiday.

The pilferage of items from hotel rooms is an act which is commonly found the world over but what can be startling was the variety of the items that are pilfered from the hotels. From common items such as toiletries, towels, cutlery…..to the interesting ones such as remotes, hair dryers, kettles, linen, curtains….and the bizarre such as Bible and light bulbs…..yep…..light bulbs…..how the f**k do you pack a light bulb into your suitcase without a fear of it being smashed!!!

Do they send people to prison for stealing things from hotels? I don’t know about that but then I can picture my first day in the joint talking to my cellmates:

And what are you in for, new guy?”

“Me? I stole a salt & pepper shaker from the hotel.”

Linkedin
Author: Rajeev Minocha
Filed Under: Personalities
Tags: bhangi, I stole from a hotel.....!!!!, pilferage of items from hotel rooms, pilfered from the hotels, The cart raiders
Hit and Run…..but you can’t hide!!!
Three people can keep a secret……provided two of them are dead!!!