SRM University – In and Out 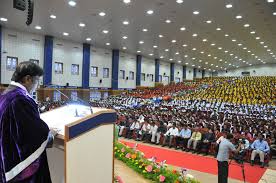 Most colleges in India I assume follow the same principle of taking the entire years fees in one go at the time of admissions and it was heavy on me to cough up about INR 410k at a single shot.

But there is little choice when it comes to children’s education and it had to be done. The counselling at SRM University  http://frommyexperiences.com/site/srm-university-chennaiquest-admission/ was done only subject to the submission of a DD of INR 210k to their office and the balance amount of INR 150k for the hostel and mess charges was paid within a month or so of their sending the admission letter.

During his growing up age I saw my son move from an interest in playing cricket to football to golf to basketball and the list goes on and on. So each time I spent money on buying the cricket kit, and then the football gear and the golf kit hoping that the interest in the sport would be a bit more than a short lived passion.

Knowing my sons habit of being a bit fickle minded I confirmed from him twice that SRM University, Amravati was his final choice and based on his final confirmation only proceeded to pay the tuition fees.

My son was living the dream in SRM, Amravati with little studies as the term had just started in August 2017 and more importantly, he was away from his nagging of his mother. He was free to eat anytime, sleep at any time, wake up at any time and even throw his wet towel (if he took a bath that is) on the bed…..life was good for him.

The campus was still under construction and since work was going on in full swing 24×7 understandably all students had to undergo a teething problem in terms of the lack infrastructure. The cafeteria food seemed to be good and my son seemed to be quite content on the same given the fact that it was a healthy mix of south and north Indian dishes.

The real issues however arose at the study front and my son seemed to be quite disappointed with the quality of the teaching faculty and it seemed that in most of the classes he was left without being able to quench his thirst for knowledge.

I assume a bit of exaggeration on my son’s part but then he would often crib that some of his professors would often stumble on basics and at many times not only would the students point out the mistakes but also offer the solutions somewhat cheekily.

Branding of the college was important to the authorities and apparently they had given admission to few students from Africa, Nepal and Afghanistan on a 100% scholarship. With that they could claim on an array of international students as part of the campus on the brochures but the decision to award them a cent percent scholarship did not go down with many students including my son who like many others got a mere 25% scholarship and had to work his ass to get into this campus.

However these things are a part of life and each time that I would talk to my son I would counsel him that he should rather concentrate on his studies and developing his skills. However the daily gossips tend to make the most ardent succumb to developing negative impressions and then it all gets caught up in a viscous circle.

On a few occasions my son came very close in deciding to be a college dropout stating that it would be better for him to take up a job with a startup rather than waste the remaining 4 years in such an institution. And all this was happening in just about 3 months of his joining the college and me coughing up INR 410K for the yearly fees.

But then more worrying than the money part was that he wasn’t happy and his thirst for knowledge wasn’t being quenched. He was getting more and more frustrated by the day. And then one day I got a call from my son at about 12:30 midnight

Son – “Pa, I got admission in University of Waterloo. I’m leaving SRM”.