As we entered into the gate of the university I could not help but be amazed at the sheer size of the Kattankulathur campus aka SRM University main campus……it seemed to be a city in itself and it took us a good 10 minutes in the cab from the main gate to get to the block where the admission counselling was being done for the 2017 intake.

On disembarking the cab there was a brief queue where the staff checked the original counselling letter of the candidate where post the verification he was handed breakfast and lunch coupons (very thoughtful, must say).

Then it was another 10 minute walk to the building and all this time as we walked I was simply absorbing the sheer size of the campus and it literally spread till the eye could see. Enquiring with  a staff revealed that the campus is spread over 300 acres of land https://en.wikipedia.org/wiki/SRM_University

We entered into the auditorium and were made to take our seats and we were in there at about 0820 hours against an appointment slot for 0830 hours. Parents and their wards kept shuffling in and filling the auditorium (seating capacity of about 4k). Then began the welcome speech and PPT presentations of the deans of the various campuses (SRM has several campuses across India) which lasted for about an hour.

We were then explained the process of how at the first stage the students would be called forward rank wise and then once all the documents were verified against the originals (list of documents is given on the counselling letter) then we would need to go to the next hall for the counselling session. 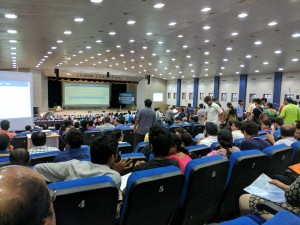 Given the size of the auditorium and the high occupancy the officials had put on several live screens somewhat akin to an IPL match (see picture) where they would keep updating the number of available seats available in each branch per each campus.

With some quick calculations in my mind I figured that my son would get CSE in Kattankulathur Campus (KTM for short) and that is what he wanted. 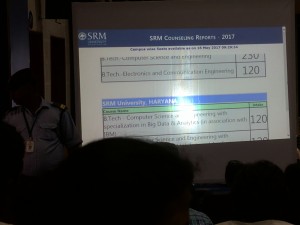 The counseling session for 2 other campuses i.e. SRM Amravati and SRM Sonepat were being held in other blocks and we started interacting with some of the students present in the auditorium to get a real feedback as to the studies and life in general in SRM KTM.

We talked to quite a few students and whilst they were quite happy in the main campus they all seemed to praise the upcoming campus in Amravati for its upscale amenities.

Both me and my son decided to forgo the counselling in the auditorium (our number had still not come) and walked out headed for another block where the admissions were going on for Amravati campus. We were able to spend quality time with their staff and understand about what their plans were for that campus.

Since the construction for the Amravati campus was still going on in a phase wise manner I understood that there would be a lot of teething issues that the first batch of 2017 would undergo for the first year at least. Added to that was the fact that the counselling and admission criteria for the Amravati campus was way tougher compared to the other campuses. Somehow my son was now convinced that Amravati, with all its limitations of being a new campus would be a better choice for him as compared to KTM.

The counselling session was tough and he was grilled by one of the professors (parents are allowed to be there) and it was a faceoff between an IIT alumni professor aged at about 40 and a 17 year old kid.

Of course I was there to guide and correct my son and pitch in on his behalf as and when required (not too much to prevent an overkill). His Xth standard marks was nothing much to talk of whilst the XIIth standard marks had not been declared since he followed an ICSE curriculum.

What tilted the balance in his favor was the extra-curricular activities and the professor started to be impressed by the participation in hackathons, athletics, basketball etc. It was going well and I could see that.

It lasted about 30 minutes and we were informed to submit the papers with the admission desk along with the DD of INR 210K (the DD is mandatory without which there is no counselling session forget the admissions) and that the results will be informed to us via mail.

We had nothing more to do there and hence walked out into the godforsaken Chennai heat at about 1245 hours hailed an uber and got back to the hotel physically and mentally exhausted and plonked ourselves on the bed with a sigh of relief.

We thought we’d have a bit of a celebration in the evening so the father son duo set out towards the city and a 10 minute stay at Marina beach (on the insistence of my son) was enough for us to pant for an confines of an air conditioned Uber cab. 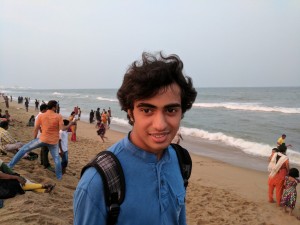 We reached a pub called Illusions and my throat was parched for a vodka filled with ice but the entry was denied.

Doorman – “You need to be in casuals”.

We both were wearing T shirts and Bermuda’s but probably that was not good enough for them…..has to be trousers…..who the fuck would wear trousers in the Chennai heat!!! We were also barred entry due to the legal age for drink being 21…..well my son could enter and have a coke….no sir.

We were out again on the streets and finally managed entry in Hotel Raj Park where both of us quenched our thirst, me with my vodka and my son with coke. We logged into the SRM website to see if there was any update……Cheers…..the site had been updated and his name figured in the merit list.