Most Indian highways in the northern region play host to local wayside restaurants called Dhabas comprising of an aged factory shed-like building where the food is cooked, surrounded by Charpais (coir woven wooden cots and a big wooden plank serving as a combined seating and table arrangements) on which the food is served with blaring Punjabi songs or nowadays with remixes which can be quite a nuisance at times! In the old days, Dhabas used to cater mainly to truckies and long-distance travelers but now the simple, unpretentious and wholesome food served at them, is enjoyed by people looking to escape the busy city for a few hours.

On any of my road trips I would always prefer to stop for food or a cup of chai at a dhaba than at a restaurant though I must admit that not all dhaba’s are guaranteed to give you the great food that is generally come to be expected of them.

Of the numerous road trips that I have made in India and the hundreds of dhaba’s that I have had food at one that deserves a mention on my must have list is Hari Om Dhaba located on the Delhi – Agra road also known as Mathura Road. It is located just before Palwal town and is about 50 kms on the highway from Ashram Chowk and what was surprising was that whilst researching on this topic I was able to locate the Hari Om Dhaba on Google maps…..wow!!

The first visit to the dhaba was as uneventful as any other visit and as we entered the dhaba there came our maitre d’, a small boy in a blue checks knickers and vest who greeted us by slapping a big steel tumbler of water on the rickety table with fingers inside the steel glasses supporting as many of them as they could. When we asked for the menu, the little boy started rattling off without pausing for breath… Dal-makhani Dal-fry Aloo-gobi Palak-paneer Matar-paneer Mushroom-masala. Looking at our undecided faces he went back to the kitchen and came back with a heavily food stained laminated menu, slammed it on the table and went to take the orders from other customers. 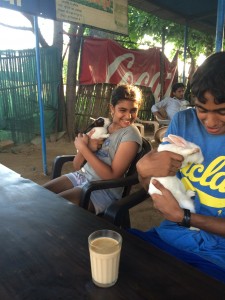 We decided to go simple and ordered aloo payaz paratha’s, dal tadka and curd (with a mini salad coming in complimentary) and within 10 minutes hot piping food was on the table and we dug into it and wow…..it was sumptuous and was literally dripping with butter….they have no qualms on the richness of the food and are liberal and to some extent extravagant on the mounds of butter on the paratha and in the dal. All in all we could not eat more than a paratha each and the bill….just about 250 bucks. Now that is what I call value for money.

The ambience is what you would typically expect in a roadside dhaba with colored tube lights, ceiling fans which barely throw any breeze, and a paan shop at the corner which blares out modern day remixes of devotional songs and the one change seen at all the dhaba’s now if the replacement of the charpai’s with the plastic moulded tables and chairs. But then when it comes to the food it beats fine dining. Probably one of the secrets in the dhaba food remains that they still use coal as the fuel instead of the cooking gas used in most restaurants. And this really does the trick as far as I am concerned even though there is a debate whether the food tastes better cooked over gas or charcoal. 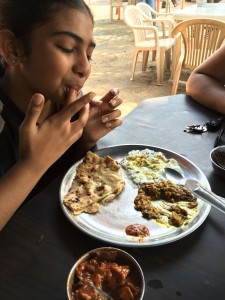 Now that I have been visited the dhaba several times the owner breaks out into a broad grin each time that he sees me. It’s our usual troupe with myself, the kids and our Labrador Hobbit. To ensure that hygiene of the place is maintained my son would take the dog for a walk to enable him to do his job before we enter the dhaba and then he is tied to one of the poles supporting the overhead tin structure. The guys have become very friendly and I guess it doesn’t take much of an effort….just a smile and a praise of their food and they are happy. The advantage being that now I don’t need to tell them each time to put in a ‘little’ more butter….as I would earlier I go “Yaar, zaraa changa jiya makhan paa deiye” and then comes the paratha’s with the extra dollops of butter on it….so much so that the tissue paper below the paratha go soggy trying in vain from keeping the butter from seeping onto the plate. 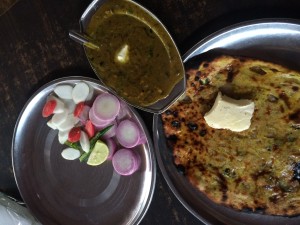 On one of the visits we stopped to have a late breakfast of what else, paratha’s and daal and dahi and my daughter screamed when the food came….”Paa, I can’t have so much of butter, I’ll become fat”…..and swiftly scooped out the dollop of butter from her paratha and put it into her bowl of daal….that was innocence at its best.

The cuisine is pure vegetarian and looking at the name of the dhaba it no wonder but then believe you me the food is so sumptuous that I did not miss the meat….the tea can be a bit too sweet so ensure that you ask him to keep the sugar separate else it tends to be more of a chaashni than a cup of refreshing tea. A great snack to have at odd times with the hot piping tea is to ask for butter toast and here again it’s the butter which literally tends to take the main place with the bread just providing the support for the butter that it’s holding….for butter lovers like me it’s a treat.

Linkedin
Author: Rajeev Minocha
Filed Under: Eating Out
Tags: Absolutely the best Dhaba Food – Hari Om!!!, aloo payaz paratha’s, cup of chai at a dhaba, dollop of butter, Hari Om Dhaba, I can’t have so much of butter, The cuisine is pure vegetarian, typically expect in a roadside dhaba, wayside restaurants called Dhabas
Eating out at Millers 46, Bangalore