Eating out at Rajinder Ka Dhaba

One of the most favorite joints for eating out in Delhi is Rajinder Da Dhaba (roadside eatery) located in Safdurjung Enclave in South Delhi which has over the years acquired a reputation for itself.

I have been visiting Rajinder Ka Dhaba since the last 30 odd years and in the initial years it was located near a crematorium on an illegal piece of land….it mainly catered to the lower class or the lower middle class with dishes spicy chicken curry and roti’s. It lasted there for well over a decade with regular payouts to the local authorities. 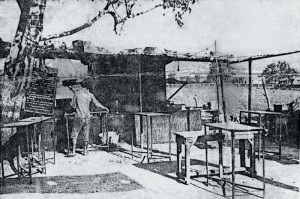 It wasn’t much to look at—a few rusty tables cemented into the ground under a large pipal tree. A tin board nailed to its trunk said “Drinking is strictly prohibited”. Of course, no one paid any attention to it. During the daytime, it could easily pass off as a roadside dhaba but then as the sun set behind the old cinema house, the dhaba woke up to its real life: cars and scooters lined up along the road, at first in a neat row, then pell-mell, wherever they could squeeze in. It was a bring-your-own-booze party. Beat constables and MCD clerks sat down for royal feasts (provided free, of course), obligingly turning away from the drunken hordes.

It is believed that the dhaba was so successful even in the initial years that the other smaller eating joints around it soon started finding themselves short of customers and most of them could not sustain themselves any further and a few soon closed down. Then a group of owners representing the other eating joints in the vicinity approached Rajinder and pleaded with him to have mercy on them since they had no other source of livelihood. It is said that Rajinder then promised to them that he would open his Dhaba only in the evenings and that the other joints would have a free hand to do as much business as they want during the lunch hours. That commitment stands true till date and Rajinder Da Dhaba opens only in the evening. 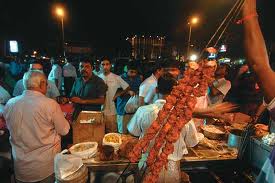 Rajinder (who is no more) has been nothing short of a case study for the B schools who being a child refugee of the India partition in 1947 went on to build a multi-crore business from scratch, a man who spent a lifetime learning to negotiate his way past the countless bureaucrats and corporation clerks, police officials and income-tax sleuths. But in the decade that followed his son not only doubled the dhaba’s turnover but swallowed up, one by one, the new-look chain of restaurants, bakeries and American diner clones that began to spring up in the once sleepy marketplace.

The dhaba’s success began to tempt others………there followed a series of challengers—a soup-and-sandwich diner, a patisserie, a coffee shop…. each opened with great fanfare, with expensive new interiors but closed shutters within a few months. There were bets laid in the market on how long the next new restaurant would last.

As regards the food the pieces of succulent meat melt in your mouth…..the service are quick I have freaked out on its Chicken Malai Tikka, Chicken Afghani, Fish Tikka and Tawa Chicken dishes. Each time it has been brilliant to say the least and the tastes are distinct for each and the masalas used for each dish has seeped into the tender pieces of meat. Each bite into the meat has you begging for more and the food is nothing short of excellent. 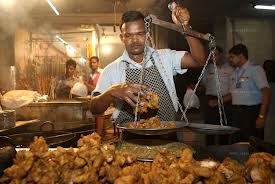 On any typical night (except Tuesday’s) one can see hundreds of cars parked to eat at Rajinder dhaba…..tandoori chicken, chicken wings, mutton seekh, galoutia kebabs are the hot favorites and being a big fan of his food I have long forgotten how many times I would have had my food here. Earlier it was with my parents and relatives, then with my friends and now with the family. It’s a bit of a let down to take the family there to eat on account of the open bar kind of environment but then you could either just focus on the food and ignore the rest or take the food into the comforts of your car.

There is a close nexus between the local politicians, the police and the joint which openly flouts all norms. It is a large open bar where people come in droves and in a typical Delhi style pour out large pegs of whiskey in their Maruti’s and gobble down chunks of tandoori chicken. The place is chock-a-block from 7.30 pm onwards and it continues well till about 11.00 pm or so. Of course over the last few years the Maruti’s have been replaced by swanky BMW’s and Audi’s. The popularity can be understood by seeing the rush of people there. The dhaba serves until 11:00 and the crowd stays intact till then. 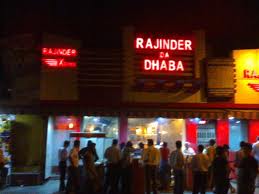 This place is one of the best places to have non vegetarian north Indian/Mughlai food in the city. It has got a true Delhi feel to it…..and there is a lot to try over here. And the prices, we have so much food for so less. Beats some of the better known restaurants that burn a hole in your pocket hands down.

If you are a foodie, you have to be here……at least once and if the bug bites you, well then there is no count to the number of times you would visit there. Don’t expect too much on the ambience or the environment….just focus on the food and you’ll know what I am talking about.