The other day we were about to get into our car when a nice looking Audi glided past us and as we admired the car the tinted windows rolled down, the driver stuck his head out, curled his tongue, dug deep into his throat and spat out……Aaathooooo!!! It had happened very fast and caught us unawares….so whilst the Audi moved ahead and turned the corner my son had misty eyes when he realized that the spit had landed on his trousers. I wish I could have torn the drivers tongue out.

It’s not something that is unusual in India and no part of the country is immune from this habit…..be it a guy from Bangalore, Mumbai or New Delhi…..they have all developed this obnoxious habit to spit in public irrespective of the place. Idle commuters waiting for the train spit out on the tracks, fruit sellers waiting for the buyers spit outside their shops, if they are at the bus stand they will spit at the stand, on the steps of the bus while boarding, and through the window on the road while riding. The auto-rickshaw-wallah will slow down while spitting, the taxi driver will poke out his head and spit in the air, the truck driver won’t even look while spitting. Seems like there is some big spitting marathon going on in the country and everyone’s participating.

And it’s not the paan or pan masala chewing breed that I am talking about….they are indeed bound to spit….but what about the others….how do they keep generating so much bile that they need to spit and what’s the passion behind the frequent and energetic ejection of saliva? Just imagine how disgusting it is you when you see someone hocking a glob of gunk out of his throat and shooting that loogie onto a sidewalk.

It’s so much so that I felt it’s become a national pastime….a desi sport in its true spirits. 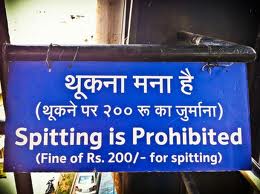 The habit of spitting on the ground has been a worldwide phenomenon for ages. People of all walks of life have a reason for doing that, even though it might not be the habit of all.

In Ghana, spitting is a daily activity by most of the population, irrespective of where they find themselves. No day passes by without coming across people spitting into a gutter or right in front of other people. Even in the market places, which people count on for their daily meals, people do not care, but spit when or wherever they find themselves.

Social attitudes towards spitting have changed greatly in Western Europe since the last 400 years or so and till then frequent spitting was part of everyday life, and at all levels of society it was thought ill-mannered to suck back saliva to avoid spitting. Spittoons were used openly during the 19th century to provide an acceptable outlet for spitters.

In North India it is still customary for mothers to lightly spit at their children to imply a sense of disparagement and imperfection that protects them from evil eye (or nazar).Excessive admiration, even from well-meaning people, is believed to attract the evil eye, so this is believed to protect children from nazar that could be caused by their own mothers’ “excessive” love of them.Sometimes, this is also done with brides and others by their loved ones to protect them from nazar. Shopkeepers in the region will sometimes make a spitting gesture on the cash proceeds from the first sale of the day (called bohni), which is a custom believed to ward-off nazar from the business.

The one habit which I see the most irksome is using saliva to turn the leaves of a book or to count currency. In today’s world, everybody will have to photocopy some books or papers….the persons who operate the machines use their tongue lavishly to turn the leaves and count the copied pages. When everybody practices this unhygienic way of turning pages, they are putting the germs in the saliva of somebody else on their own tongue. Uugh !!!

According to the Canadian Center for Occupational Health and Safety (CCOHS), an important source of respiratory disease like TB spread is by spittle. The bacteria in saliva encrust themselves as spores and survive the heat of the street. Mixed with dirt, they begin spreading through the air waiting for someone to infect, and diseases transmitted this way spread very quickly. This is the main reason why spitting is considered an ultimate despicable act.

According to a news report published  http://articles.timesofindia.indiatimes.com/2012-03-25/mumbai/31236011_1_mumbaikars-fines-cough during the six months from July to December 2011, the BMC collected a whopping 2.24 crore rupees in fines for spitting. Just imagine……Rs 2.24 crores in 6 months from a single city….so if we were to take this campaign to all the cities and towns in this country we could probably take care of our fiscal deficit …..maybe our Finance Minister needs to read this post and then he’ll say….”What an idea, Sirjee”!!! 🙂

Linkedin
Author: Rajeev Minocha
Filed Under: Health Care
Tags: Aaathooooo!!!, curled his tongue, diseases transmitted this way, fines for spitting, habit of spitting on the ground, In Ghana, mothers to lightly spit at, nice looking Audi, protect children from nazar, spit in public irrespective, spit in the air, spitting is a daily activity, The great Indian Spitting contest…..Aaathooooo!!, torn the drivers tongue out., use their tongue lavishly, using saliva to turn the leaves of a book, ward-off nazar from the business., Western Europe since the, will slow down while spitting
Dandruff or dry skin…..try this!!!
When Healthcare became Wealthcare…..