My son had returned from the park in the evening and after disembarking he was parking his bicycle in his Nana’s house and he lost his footing…..trying to keep his balance he shot out his arm to take support from the gate and missing it by inches he fell down arms open at the name plate and the fiber glass sliced his forearm. He had a deep gash on his arm…about 4 inches long and deep that it exposed all the veins and through the blood I could spot the bone….it was a clean cut just as a butchers knife cuts effortlessly across the meat.

Thank God merciful that I was present there at that moment and had the car on hand….took out my handkerchief and wrapped across the cut….my son was in a state of shock….out of pain or on seeing the open cut, I don’t know but then we rushed him to the Fortis Hospital in GK II known as Fortis La Femme 🙂 ….a kind of a boutique hospital for women weighed down by layers of fat around their bellies and with their chubby fingers studded with Solitaries…well this was not the time to be judging the hospital and their clientele…..we rushed in and the team of doctors and nurses started administering the first aid…..30 minutes down the line with a couple of injections my son started to feel the effect of the pain killers and allowed the nurses to do a better job of cleaning the wound and stop the bleeding…..another 30 minutes and he had a stupid grin on his face….he must be flying high on the drugs…..the wound needed a surgery to examine the damage made and the admin desk asked me to complete the formalities….I had a long talk with the surgeon and he was ready to start the surgery that night….the help desk gave me an estimate of 26k for all expenses including a 24 hour stay over at the hospital room. Then began the arguments and the drama unfolded….here is my experience about the healthcare practices which I hope were more of an exception than a rule…….

Admin “ Yes, that is for the recovery of the child”

Me “ But how can the policy be against the surgeons advice”

The admin lady starts to get irritated and makes no attempt to hide it makes a call and in a high pitched tone starts complaining to the other side of how a patient (that’s me) is making all kinds of problems and is arguing of what the company policy says. Ten minutes down the line she made out a fresh quotation at 23k. Since the stay charges have reduced there is a corresponding reduction in many of the ancillary charges. I’d saved 3k in less than 15 minutes.

As I was going through this process my wife was busy calling her contacts and finally had talked to the Fortis hospital in Vasant Kunj where the doctors advised her that the treatment may cost anywhere between 10k to 15k depending on the extent of the wound. She advised me to move out of this place and considering the fact that the first aid had been administered I decided to take my son to a bigger and better hospital. It was around 11:00 pm and we drove towards Vasant Kunj with my son sitting in the back seat with the stupid grin still on his face.

The doctor on call and the nurses examined the cut on my sons arm and reconfirmed the fact that he needed surgery and that the same could be scheduled for about 3 am that night and then he could be taken home the next day after a few hours of post surgical monitoring. “Great, let’s start with the admission process” I said. Having filled up the forms I was given a quotation of 96k. From 26k I had gone to 23k and now to 96k. 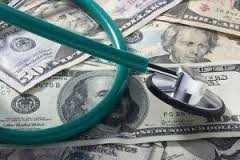 “Nahin, kuch mistake hai….9.60k hona chaheye not 96k”, I told the clerk at the admission help desk. “Nahin sir, no mistake….its 96k” replied the clerk with a Malayalee accent which can be downright irritating in any circumstance but all the more maddening in the situation I was in. And all this culminated into an anger which I vented out on my wife (something akin to Kumbh Mela, once in 12 years 🙂 )

“Is this why you wanted me to come all the way to Vasant Kunj at this hour”, I screamed at her waving the quotation all across her face “And where do you think that I’m going to take my son at this hour of the night”…..I was livid and then turned my ire toward the group of doctors and nurses sitting at their desk…..

Doc “But you have been allotted a deluxe room”

Doc “All charges move as per the category of the room”

Me “I did not ask for a room and the surgeon said he could be taken back home after 6-7 hours”.

Doc “But, it would be better is post surgery he is in a room”.

Me “Why can’t he be observed in the OT and why do all charges go up as per the room category”.

Me “Great, then do it in the parking lot”.

I was like a bull in a China shop…..my son was badly injured, I had walked out of a hospital hoping for a better health care, it was almost 1 am and I was dirty and tired, I blew up on my wife and now I was being asked to shell out almost 4 times more than a “La Femme” f*****g boutique hospital and I did not know where to take my son in the middle of the night!!!!

And just as I had vented out my anger I and sat across the group of doctor’s, sisters, brother’s et al and spread out the three quotations in front of them. No anger in my voice, no high pitched tone…..just a cold stare and with a cold voice the following dialogue ensued….

Me “These are two quotations from Fortis GK II at 26k and then 23k”.

Me “And the treatment for the injury is the same”

Doc “Yes Sir, but we have better doctors”

Me “And all these quotations are in writing”

Me “Great, I am going to call the media”

It must have been effective (I should have been a lawyer) as they all went into the meeting room for the next 15 minutes and then they all came out……Doc.. ”Sir, there has been some misunderstanding on the codification, actually the code of the treatment was 01 but the help desk put it as 03. Also there were a few more codes which needed correction and we have informed the front desk about it”.

So, the fall guy was the front desk……I couldn’t f****g care and soon I had a revised quote of 19k in my hands…..at about 2 am my son was wheeled into the OT and at 5 am the surgeon informed that there was no major damage to the arteries and that barring a life time scar there was nothing to worry about.

Till today I have all the four quotations with me and looking back I wonder that if this is something that happened with me could it not be possible that it would have happened with someone else. I have great respect for the doctors and their profession but it has become very commercial and with the corporate stepping into this industry and keeping a focus on their revenues its fair enough that we keep a focus on what we are being charged for.

Linkedin
Author: Rajeev Minocha
Filed Under: Health Care
Tags: against the surgeons advice, allowed the nurses, and the surgeon, arrange for the surgery, be observed in the OT, bigger and better hospital, butchers knife cuts, doctors and nurses, doctors and their profession, estimate of 26k, first aid, flying high on the drugs, Fortis hospital in Vasant Kunj, Fortis La Femme, had a deep gash on his arm, When Healthcare became Wealthcare…..
The great Indian Spitting contest…..Aaathooooo!!
My arse hurts like hell !!!

2 thoughts on “When Healthcare became Wealthcare…..”