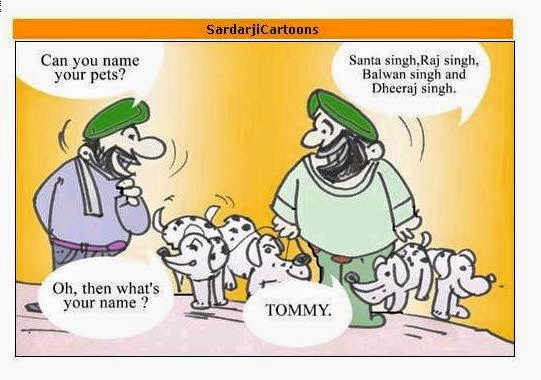 Sardar, a word of Indo Iranian origin is a title of respect and nobility (Sar, literally meaning “Head” in Hindi and also “Head of Authority” whilst dar means “Holder” in Sanskrit and it was this title which was used to denote Princes, Noblemen and other aristocrats. However, in India the word often refers to a male follower of the Sikh faith and many a times the word “ji” is added to denote respect. But why are the Sardars the butt of all jokes in India…

Well not exactly all the jokes….we have jokes on Sindhi’s, Gujarati’s and the ever generalized Madarasi…..but when it comes to Sardar jokes….well, they have a different kind of appeal. The very beginning of a joke….”ek Sardarji the…” and the chuckles begin. It is enough to give the listener a head start as to what class the joke would be about……and typically there have to be a Santa and Banta Singh…the two most popular names used in stereotypical Sardar jokes armed with the dominant traits of being naïve, inept, unintelligent, unclean, or not well-versed with the English language.

I have a strong affection and respect towards the Sikh community (I am myself a Punjabi and a proud one at that) and by writing this post I do not in any manner mean any offense towards them. Rather I find it amazing to see their enormous capacity to poke fun at themselves….a trait peculiar to Punjabi’s and something that many an ethnic community would take offense to.

Even though I tried to do a lot of research as to the background of why the jokes on Sardars I could not find much that would merit a mention in this post. So, with a salute to all the Punjabi’s and the Sikhs for their loud, brash and big heartedness…..I dedicate some jokes to them (with Santa and Banta playing the lead role….of course!!!)

Santa and Banta saw a poster at a police station:
“Two White Men Wanted for Rape.”
Santa: These bloody white people always get the best jobs.

Santa, unable to satisfy his wife, took Banta’s advice.
While having sex, he asked her: Do you feel any different?
Wife: Yes, today you are screwing like your friend Banta.

Santa: Will you marry me?
Girl: Sardar Ji, I’m a lesbian. Santa: Lesbian?
Girl: I like to have sex with girls.
Santa: Lai, fer taan meyn vee lesbian haan.

Visa officer filling information in the form asked Santa Singh, ?Where were you born?? Santa Singh: Dera Gajhi Khan.
Visa officer: Please spell it?
Santa Singh thought for a while and said, “I think, I was born in Delhi.

Banta to Doctor: I have diarrhea and it won’t go away.
Doctor: Did you try using a lemon?
Banta: Yes I did. But when I remove it, it starts again

Linkedin
Author: Rajeev Minocha
Filed Under: Personalities
Tags: a word of Indo Iranian origin, comes to Sardar jokes, enormous capacity to poke fun, Gujarati’s, inept, jokes on Sindhi’s, male follower of the Sikh faith, naïve, respect towards the Sikh community, salute to all the Punjabi’s, Santa and Banta Singh, Sardar, Sardars the butt of all jokes in India, The Great Sardar’s….!!!, title of respect and nobility, unintelligent
A visit to the Zoo
Mere Sahib ki Badi Gaadi