Vegetarianism has been for thousands of years a principle of life and environmental ethics amongst the Hindus. Though the Muslim and British colonization radically undermined and eroded this ideal, it remains to this day a cardinal ethic of Hindu thought and practice. A subtle sense of guilt may persist among Hindus who eat meat, and there exists an ongoing controversy on this issue.

As per the ancient thinkers and philosophers of India life is seen as the very root of the Divine, an emanation of the source of life and a part of the cosmic existence. They further held that each and every life form, whether it be water, trees and even small crawling insects posses consciousness and energy. They are a vital part of the ecological system and need to be respected for their own right. Nonviolence, ahimsa, the primary basis of vegetarianism, has long been central to the religious traditions of India-especially Hinduism, Buddhism and Jainism. 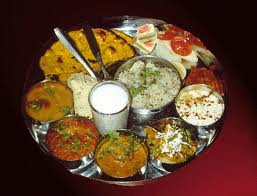 According to studies, vegetarians have better health than people that eat meat. It is said that vegetarians tend to have lower rates of coronary artery disease, gallstones, cancer (particularly lung and colon cancer), kidney stones, colon disease, diabetes and high blood pressure. Some researchers have gone further than just this and claim that sometimes a vegetarian diet can help cure a person already suffering from these diseases.

Vegetarians also tend to eat proportionally more polyunsaturated fat to saturated fat compared with non-vegetarians. Animal products are the major sources of dietary saturated fat. In 1990, Dr Walter Willet, who conducted a study of diet and colon cancer, said, “If you step back and look at the data, the optimum amount of red meat you eat should be zero.”

Animal meat and products are supposed to be very high in sodium, which affects the blood to retain water and also tends to cause a build up of plaque in the arteries. This results in the reduction of the flow of blood, which combined with the plaque, causes high blood pressure. Some doctors claim that vegetarians have a higher life span as compared to the meat eaters between three to five years. 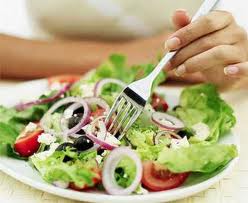 Once an acquaintance of mine made the following astonishing and silly justification of animal slaughter saying “the animal, being an herbivore, does not react to blood and remains oblivious throughout to what is happening around it and to it, both prior to and during the slaughter.”  “Also, since the brain of the animal is not as developed it does not realize the fear of being killed and hence it is permissible to consume its meat.”

Let us try and visualize a situation where a man is taken captive and is being led to a slaughter house where he would be beheaded and skinned for the consumption of his meat. He may not fathom the need for another person to consume his meat but his instincts emit clear signals that his life is at danger. What would be his state of mind at that moment when he sees the slaughter house nearing with each step that he is forced to take. His mind is racing in all directions and all in a flurry, his thinking is blurred and mixed between a wish to somehow escape this bad dream and run. But his wobbly legs do not even support his weight, so fast is the rush of adrenaline and the complex chemical composition of his body that he is in a state of shock, almost as if in a trance. The destination comes near and he is forced down on the block with his neck put firmly in place. He starts to whimper, loses control over his bladder and his mind is still racing in a highly mixed state of nervousness and fear. All this rush of chemicals and body reactions has happened in just few minutes from the time he was dragged from his cage. It has impacted his nervous system and there is a high level of toxins flowing through his blood. With a swift action of a razor sharp blade the throat is slit and blood spurts out like a fountain, the heart still beats and continues to send out messages to the brain and the body goes into convulsion as the brain is desperate for oxygen. Bang comes down the blade and in a swift action his head is severed from the rest of the body. His body lays there still writhing and making small movements and the brain continues to send messages until it finally stops. The butcher is pleased with his work and starts to drag the carcass to de-skin and clean it. 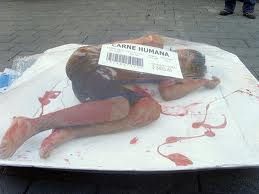 All what it takes is to put yourself in this position and try to visualize the psychological impact it would have on your body and the nervous system. It would probably not take any rocket scientist to figure out that all this would have a significant impact on the central nervous system of the human body and there would be a definite mix up of all chemical processes that normally take place in our body leading to release of excess toxins. All this would be not only circulating in the blood at some stages infest itself in some form in the flesh that is intended to be consumed.

By ingesting the grosser chemistries of animal foods, one introduces into the body and mind anger, jealousy, fear, anxiety, suspicion and a terrible fear of death, all of which are locked into the flesh of butchered creatures. 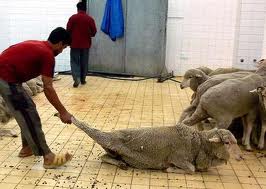 If this is the affect that would impact on the human being would it not do so whether we talk about the slaughter of a cow, lamb or a chicken? I am neither a doctor nor a psychiatrist to state an opinion on the similarity of such an affect on the animal’s state of mind but I am sure that there would be a raging controversy on this between the medical field itself and amongst the various propagandists of the world’s religions.

Linkedin
Author: Rajeev Minocha
Filed Under: Health Care
Tags: a slaughter house where he, anger, Animal meat and products are supposed to be very high in sodium, beheaded and skinned for the consumption of his meat, brain continues to send messages, brain is desperate for oxygen, cardinal ethic of Hindu thought and practice, fear, he is in a state of shock, Hindus who eat meat, his thinking is blurred and mixed, infest itself in some form in the flesh, jealousy, leading to release of excess toxins, life is seen as the very root of the Divine, locked into the flesh of butchered creatures, Vegetarianism has been for thousands of years a principle of life, vegetarians have a higher life span, vegetarians have better health than people that eat meat, vegetarians tend to have lower rates of coronary artery disease, Why Vegetarianism?
My trials towards inner peace
The Miracle Water