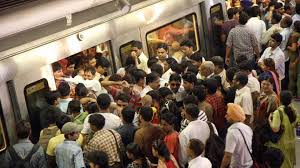 The villain snatches a hard disk containing secret government data and the FBI agent pursues him only to find out that the culprit has blended into a large crowded market. The next few minutes were in slow motion with the agent narrowing his eyes and scanning the hundreds of faces identifying, rejecting and then moving on to the next face looking for a ‘out of place’ expression or something to that effect and within the next thirty seconds of scanning faces (still in slow mo) he spots the culprit, the culprit tries to flee and the agent running through the crowd leaps into the air and lands on the culprit. Seconds later the villain is handcuffed and escorted to a police car with the hero having just saved the world from another apocalypse. End of movie.

No fucking shit like this happened to me when I was pickpocketed a few months back. Having been through the crowded streets of old Delhi where we had gone for our Diwali shopping me and my kids decided to board a bus back towards Connaught Place and with just a few passengers on board we managed to find a seat for my daughter with me standing by her side. An uneventful journey as the bus approached another stop and few passengers readied to disembark when a fellow passenger shouted at me….”Someone suspiciously walked by you….check your pockets”……I checked for my iphone…ok….my Samsung phone…ok…..and then my wallet….shit….it wasn’t there. I had been pickpocketed. I asked the driver to stop the bus and we ran back to the bus stop where the passengers had disembarked.

It could have been anyone in the crowd since the passengers who had disembarked had now blended into the crowds waiting for their next bus. I tried to scan the faces (no fucking slo mo here) and I could make nothing out from this exercise…boarded some buses to see if I could somehow spot someone ‘perspiring’ or with ‘shifty eyes’…..but no such thing. I was totally lost into this search mode for some few minutes and then realized I was probably chasing a ghost and the sense of protecting my kids became more important than anything else. Pickpockets tend to operate in gangs and situations could turn ugly so I decided to let go of the issue and let things be. It was all over in 10 minutes.

A cycle rickshaw fellow was understanding enough and offered us a free ride till the police station….and all along the way I was busy calling the banks and the credit card companies one after another telling them to block my cards. Now, with the chip technology in place each transaction requires a PIN to be entered physically taking the risks away but then I was not taking any chances. Not having my card numbers at hand did not pose any hindrance as the banks have their own verification procedures and after verifying my credentials they blocked my cards ….my head was throbbing with pain….so many things were crossing my mind with each passing second….I’d lost my ATM cards, my PAN card, credit cards, medical insurance, driving license and what all that we keep….not to mention the cash….and here I was about 7 kms away from where I had parked the car with no money in my pockets and two kids to take care of.

The next in line was the filing of the FIR where a constable gave me muft gyan (words of wisdom for free) on how we should be more careful in life and chided me on carrying all my cards in a single wallet….Behen C**d, Ma ke L**e….ek to mera wallet chori ho gaya and tu mujhe gyan de raha hai…I wanted to yell on his face….with so much happening all at the same time and my kids with sullen faces I really don’t know how I kept quiet….maybe I’d just been drained of all energy. 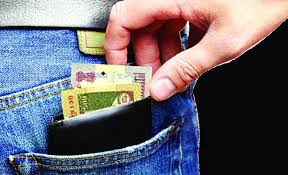 The filing of the FIR took a few processes with an application on a sheet of paper where I was asked to state that the wallet was ‘lost’ and not ‘stolen’. I did not have the energy to argue but I guess if I had gone into the details that would have qualified for another article. The application was initialed by the top cop (SHO) and then hand carried to the EDP dept. where the details were punched into a software and with a printed FIR I had to hand carry it back for the signatures and the seal.

I entered into the SHO’s room for the signature on the FIR and with about 15 people in his room (gathered for various reasons) he had a good audience and a it was his turn for a little muft gyan (words of wisdom for free) on how ideologies and morals have decayed over the last few decades with each of those 15 jerks in the audience nodding their heads in total agreement (as if they cared a fuck). With his performance coming to an end he then gave the finishing touch…..he barked at the constable to get us an auto and handed me two hundred rupees to pay for the ride and for the car parking when I got to CP. I asked for his bank details such that I could send him back the money to which he looked offended. He had just given a wonderful text book PR exercise and here I was spoiling it.

The first step was to get my stolen ATM card replaced since there is nothing that I could do without cash and this was the easiest one….walked into the bank and on submission of the FIR copy and the PAN card as proof of identity (extracted from my mail) I had a flashy new ATM card with me which would get activated in 48 hours.

Getting the replacement of the stolen PAN cards was a bit of an exercise which I had not anticipated even though the procedure is simple. There is an online application to be filled on the govt. portal and whilst there are options of “Reprint card” and “Make changes to the card” they both take you to the same application form. After the online submission one is required to take a printout of the form and attach copies of other documents such as proof of residence, identity etc. (details given on the form) and courier the same to the IT office in Pune where they have a centralized processing center. All 3 applications i.e. for self and my two kids (yes, they too have PAN cards) were rejected on some grounds or other. So, I made another docket (under the same application number) and attached the relevant documents and sent them a second time with a covering letter to the concerned office.

Yet again the application was rejected stating that the documents submitted were not correct so the same exercise was repeated for a third time and thank God for small mercies I got a confirmation that the applications have been accepted and in the next 2 weeks or so the PAN cards were received. I do not still understand the reasons for the rejections for the PAN cards but can only assume that they must be using this technique to filter out dubious requests for reprint of cards.

The dreaded driving license….it was a nightmare to get one in the first place and now to go to the same office to apply for a duplicate was not something that I looked forward to but then it had to be done….no point in driving around town without a license and exposing yourself to the whims and fancies of the cops. A little angel (in the form of my driver) came to help and he took upon it to ensure that I do not have to do any kind of running so while he did all the paperwork through his ‘jugad’ I had to make just one visit to the RTO to get my digital photographs and signatures. Three weeks later I had my DL back.

It’s been almost 6 months since this incident and it took me that much of time to get all my cards, licenses, ID proofs back.  So, while losing money is disappointing the loss of documents and the efforts required to get the replaced is the real pain.

An experience of a life time…..except taking precautions there is nothing much you can do about this and it’s better to let go of a wallet than to confront the gang……you may end up losing much more than the wallet…..and it’s not worth it!!

Linkedin
Author: Rajeev Minocha
Filed Under: License Raj
Tags: each transaction requires a PIN, end up losing much more than the wallet, filing of the FIR, get my stolen ATM card replaced, I had been pickpocketed, I was pickpocketed, I’d lost my ATM cards, Pickpockets tend to operate in gangs, rejections for the PAN cards, signature on the FIR, stolen PAN cards, than to confront the gang, to let go of a walle, wallet was ‘lost’ and not ‘stolen
OMG …..I was caught drunk driving!!!