My adventures with Astrologers

Being an Indian and not being exposed to the world of astrologers is beyond comprehension…….it starts from the day that we come into this world….the time and date of birth are promptly jotted down and the journey with the astrologer begins.

Do I believe in astrology…..well I’m not so sure…..admittedly it’s a science but then there are so many people practicing it with varied skills and depths of understanding of the subject that from my perspective I don’t have a clear answer….though its always pleasing to listen to some of them specially when they have all the nice things to say about my future.

The last few years were particularly stressful on my career front and I turned to an astrologer in the distant family to seek salvation or probably more of peace of mind. It is always nice to hear the astrologers plot out the planets in the birth chart and the effects that they can influence on your life….as always the statements are that the worst time has passed away and the present positioning of the planets will take away all worries. This was exactly what I had to hear on 14th Jun 2011 from an astrologer and that due to the repositioning of the Saturn all woes were a thing of the past……two weeks later on 30th Jun 2011 I lost my job. When informed about this the astrologer went into deep thought and said hmmmm  !!!…..and the conversation ended with that. So much so for the good effects of the planets.

After a few months I contacted another astrologer who seemed to be quite well known in Bangalore and his office is adorned with newspaper snippets of celebrities paying him a visit…..a large newspaper clipping shows Bryan Adams sitting cross legged on the floor listening aptly to the astrologer in his office. The charges at 2.5k were steep but it was an investment with a quick pay back (if it worked that is). His assistants took out a computerized horoscope (which I have now renamed as horror scope) and after a brief glimpse at it his opening sentence was ……”very lucky” and that was enough to send my adrenaline pumping. “Come back in 30 days and tell me the good news on your new job”….and he ended the meeting. Now that must have been a quick understanding of my horoscope (sorry horror scope) as the meeting didn’t even last for more than 5 minutes.  Anyway, I went back to him after a month with status quo and again after a brief reading of my horoscope the same dialogues…”very lucky”…..”Come back to me in 30 days with the good news on your new job”. Well, I was back again for the 3rd time and I think I could perceive a bit of irritation on his part…..the dialogue of “very lucky” had a less welcoming tone to it but he continued and completed his  sentence…..”Come back to me in 30 days with the good news on your new job”. I was adamant to extort the maximum value for the money I had spent on this venture and thus went out for the forth visit which ended at the reception itself. If I needed to meet Guruji then I needed to shell out another 2.5k……I went back home feeling not so lucky after all.

I have even ventured into the small ‘astrology shops’ on the roads which can be easily spotted through the sign boards with the image of the palm of the hand.

The room was compact and gave a feel of being seated in a storeroom and the walls were adorned with large size photographs of gods and goddesses and the air was thick with incense. The guy behind the table asked me to sit down and asked me if the fee of Rs 100 was OK with me….”Sure”, I said and he broke into a smile. He proceeded to hand me 9 small sea shells which I was instructed to throw on to the table after a small mind prayer to the family deity. Once the shells had been thrown onto the table like a pair of dice at a casino he proceeded to do some calculations. The process was repeated thrice at the end of which he again broke into a smile and said “you have a strong destiny, have done well and will continue to do well in life”. “However, there are some minor problems that are there which need to be corrected”.

There came the deal breaker……as a remedy there are ‘upvaya’s’ available and this needed the chanting of mantras which could be done by the priests at a nominal cost of Rs 9,000 only.  Hahaha. That was a good enough slap in the face to wake me out of my incense induced stupor. I’m blaming the incense for messing with my mind. It was so thick in there that the scent lingered in my hair and on my clothes till many hours later.

Maybe the ‘parrot picking cards’ astrologers are next in line for consultation. 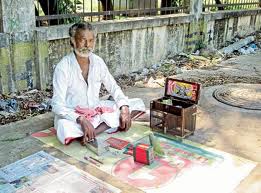 Still, I can’t help wondering if there is a really good astrologer somewhere out there and when I do find him will update all you guys. Till then, happy searching.

Linkedin
Author: Rajeev Minocha
Filed Under: Religious
Tags: astrologers plot out the planets, astrology shops, birth chart and the effects, computerized horoscope, Do I believe in astrology, My adventures with Astrologers, parrot picking cards astrologers, really good astrologer, the good effects of the planets, the world of astrologers
The basic tenets of Hinduism
Holy Cow!!

1 thought on “My adventures with Astrologers”